A poetic documentary about overcoming depression through art after the murder of a dear friend who was killed because he was 'propagating sinful homosexuality'.

"Farewell to Xulhaz is about friendship, murder, depression and how art can reach you when nothing else can.
Xulhaz Mannan was a dear friend who was murdered for his LGBT activism. His murder sent me spiraling in a depression but in the end he managed to save me from beyond the grave.
Even though it's a personal movie, it addresses the universal themes of love, depression, resilience and hope."

Larissa Korporaal is a Dutch filmmaker. Her first film is known for its poetic visual and narrative style. Graduated from Amsterdam Filmschool she is motivated by social injustice and inequality. But what binds us all is the universal need to be heard, seen and loved.

Directing techniques
Being new at filmmaking, Larissa is open to anything but having lived a little, she also knows what she wants without being dogmatic. After having discovered that she could tell stories through film, she didn't have a choice to go back to anything else. Some stories feel so important, they need to be made and shown to the world. She doesn't make films because she wants to but because she needs to. Larissa does enjoy creating the circumstances in which the characters feel comfortable enough to show their inner selves and things might happen. In that safe space, we get glimpses into other peoples life that we can relate to.

Visual Style
When looking at the world, Larissa is fascinated by details. Extreme close-ups give glimpses of the whole without revealing it. Her dreams are an inspiration to create a world where anything is possible and where poetic images can evoke emotion. She uses saturated colors, green screen technology, overlays and special effects to tell the stories that are important to her.

Sound and Music
Sound is essential in her filmmaking. Maybe more so than music. Sounds and a soundscape help her to enhance the feeling she wants to portray. Music and sound can immerse and draw the viewer in. Larissa enjoys playing with sounds, building up layers to create her own 'landscape of sound' to conjure up the mood she is looking for.

Personal life
Based in Amsterdam after living in the US, Denmark, Romania, Bangladesh and China, Larissa lives with her partner and two cats in a castle high in the sky with a view over Schiphol Airport from where the multicolored dragons fly people to all ends of the world. 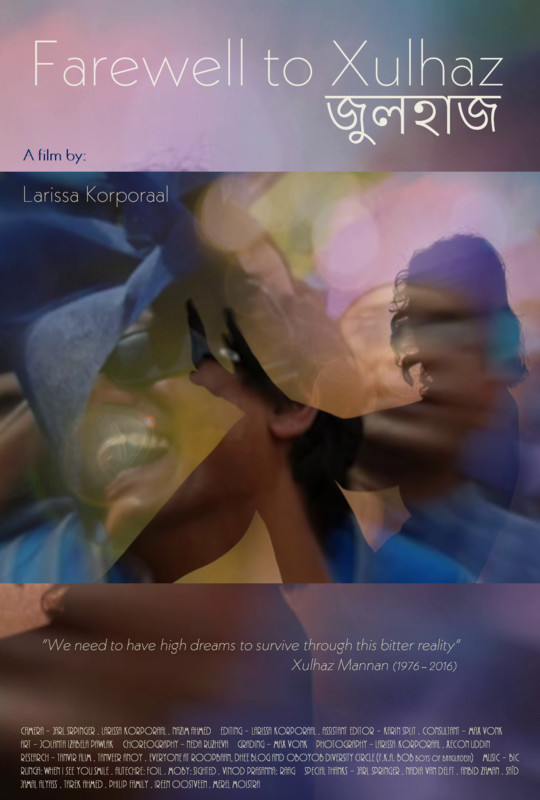