MAKE AMERICA SAFE is a musical send-up of the 2nd Amendment. What if in the next few years citizens were required to carry weapons in order to insure the safety of the public? What if the motto “If everyone is armed there will be no more crime” became the law of the land? This movie musical takes a sardonic look at this possible future.
Using the premise of a news commentary show, the film examines the kind of scenarios that could arise in this world. With music composed by Andy Peterson it sheds light on the rationales that could lead to such a future. In the end, it is students who question the validity of rights trumping reason.

These days it is so hard to read the newspaper and watch the news on TV. I believe that stricter gun control laws are needed. The wonderful people involved in this project came together to express themselves on this important subject.
This humorous but powerful movie that helps shine a light on what it means to make America safe.

Blanche Baker is an actress of stage, screen and television.
After attending Wellesley College, Blanche made her television debut in the miniseries Holocaust, for which she won an Emmy Award.
Her feature films include Sixteen Candles, The Handmaid’s Tale with Robert Duvall, Raw Deal with Arnold Schwarzenegger and the Kevin Bacon HBO film Taking Chance.
She was part of the Yale Repertory Theatre and Anna Sokolow's dance troupe.
Her theatre roles include Steel Magnolias and Edward Albee’s Lolita with Donald Sutherland.
Blanche is Senior Faculty at the New York Film Academy where she teaches in both the Acting and Musical Theatre Departments. She wrote and directed the award wining short film “Streetwrite”. 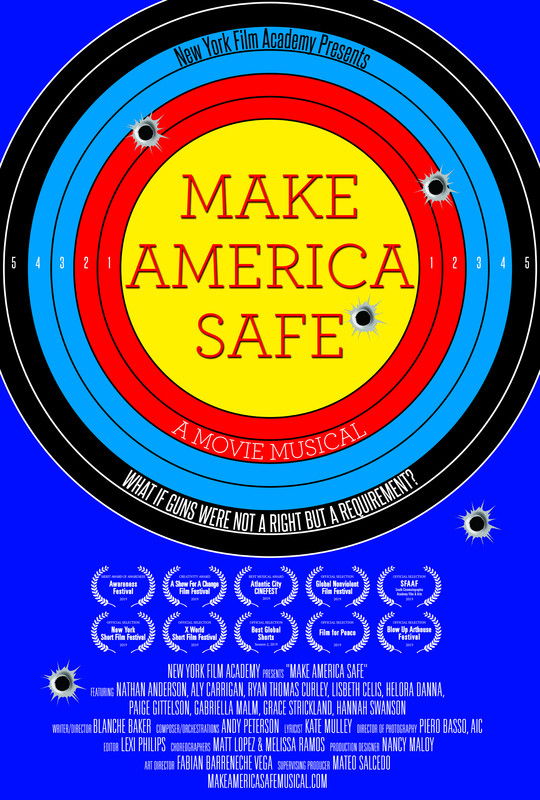