Let the Bells of Death ring loud!
Death Bells is an odd-time, loop based, jazz like melody using orchestral and world instrument sounds over top a relentless hammering rhythm. It's inspired by the likes of John Carpenter, Walter/Wendy Carlos and the Walking Dead's Sam Ewing...

Dr. Snik has risen from the grave to bring you spooky grooves from the Netherworld. A collection of song/soundscapes brought from the Pits of Hell, the Dark Jungles of the Mind and the Outer Reaches of the Galaxy...

Dr. Snik is the alter ego of Justin Snikkar.

Justin has been a professional bass player for over 30 years playing many styles and playing live half-way around the world. He has written music for as long as he's played music and has developed into writing horror/Halloween and dark music in the digital format which has endless possibilities for sonic manipulations.

Justin has teamed up recently with Mitch Markowitz (a.k.a Super Hippy) from the early 70's TV show The Hilarious House of Frightenstein featuring Vincent Price, in a Halloween party song that crosses the Leslie Gore classic It's My Party, Too Sexy For My Car by Right Said Fred and Rob Zombie.

Justin has also teamed up with Halloween King J.C. Greening from Tuscon, Arizona since 2018 producing Halloween music, sounds and stories.

Halloween Haunts & Terror Tales Volume I: Trick 'R Treating for Children (2018) was featured in Rue Morgue Magazine in the No 1. spot for Needful Things in issue 188 (May/June 2019). 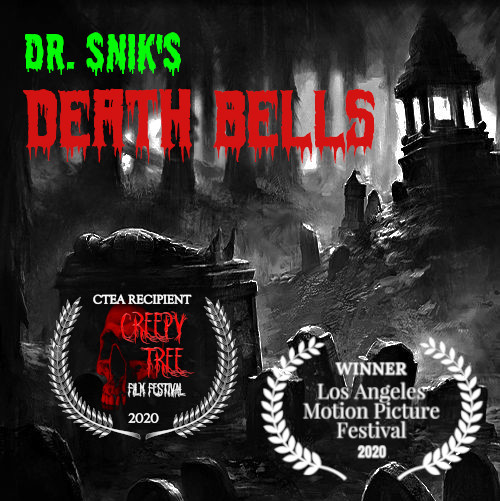