HOW WE SEE WATER


"How We See Water" follows the lives of two young women, Juana Gomez Ramirez and Rosa Maria Hernandez, in San Cristobal de las Casas, Mexico, as they grow from girls to young women and struggle to fulfill their dreams of obtaining an education while also serving a vital role in earning a living for their families.
The survival of children in indigenous Chiapian Mexico is both fragile and resonant with community. Working with the guidance of several San Cristobal organizations, Melel Xojobal and the Na Bolom Museum, Starbuck filmed with these young girls and their families for over four years.
Structurally, ‘How We See Water” utilizes both realistic and non-realistic devices and a shifting temporal emphasis throughout. The film combines footage of Chiapan life with animation, interviews, and dance. Both the visual and aural components of this film seek to interrogate conventional narrative structure and how this is represented in documentary film. In uncoupling the relationship between sound and image, the film attempts to capture an essence of place, history, and personal struggle, rather than communicating these directly.

"I first lived in San Cristobal, Mexico in the early 1990's when I was an artist in residence at the Na Bolom Museum. At that time I traveled with the San Cristobal photographer and social activist, Trudy Blom to her camp with the Lacandon tribe in the Mexican jungle. These were pre-tourist days and Trudy's close relationships in the the tribe, and her deep understanding of the need for indigenous cultural preservation, proved a great influence on me.
Returning to San Cristobal in 2015, many years after the Zapatista uprising, I was interested to see dramatic changes in both the town itself and in the surrounding Chiapan indigenous communities - some of these good, many concerning. After meeting Juana Gomez Ramirez and Rosa Maria Hernandez in Chiapas, I decided to make a film about these two very different young girls who none-the-less shared a dream to earn an education and to forge new paths in life for themselves. There followed four years of my filming in Chiapas on every possible occasion and, in doing so, participating in the life journey of both girls.
I have structured "How We See Water" as a poetic, essay film because I believe this form best suits the visual nature of indigenous Chiapas and, more specifically, introduces the contradictory struggles and variant accomplishments of these now young women. Ultimately, my intention with this film of montaged images, music, and voice, is to provide a framework for understanding the experiences of indigenous girls in southern Mexico and to invite action for equality in education world wide, while still of course leaving room for open curiosity.
As a short addendum, my home and studio were destroyed in a fire in March 2019. As a result, I lost a large portion of the footage and all of my field journals for this film. When loss like this occurs with a project, the construction of film time and film flow are interrupted. In quoting the experimental filmmaker Farocki, ‘under these conditions one has to (then) put together separate elements, a montage of ideas and images that invite us to fill in the lack, fill in the spaces." In this film therefore, the images themselves make demands, they function in dialogue with viewers own experience, and allow for an array of interpretations." (Robin Starbuck)

Robin Starbuck is an award-wining filmmaker/artist based in NYC.
Her work in experimental film, installation art, animation and media design for theater has been exhibited in Museums, Cultural Centers, Galleries, and festivals in the United States, Europe and South America.
She has received multiple awards and fellowships both nationally and internationally. Ms. Starbuck’s current projects include 'How We See Water', a film on education for indigenous people in Chiapas, Mexico, several projects for art installations, and animated projections for Theater in NYC.
She has produced the film 'Iichiilish daik: Going to the Horses', a feature length documentary film on Charlie Real Bird, of the Apsaalooke Nation in the USA, media projections for the New York based puppeteer, Dan Hurlin, projections for the NY Pan Asian Repertory Theater, and for several experimental operas performed at NY’s Symphony Space and in Europe.
She has also produced animated media projects for Chicago puppeteer, Tom Lee, and for installation artist, Mel Chen, among others.

Starbuck is a full time Professor of experimental film and animation at Sarah Lawrence College in New York. She holds her MFA in multimedia installation and performance art from the School of the Art Institute of Chicago and a post-graduate certificate in Film from NYU in New York City. 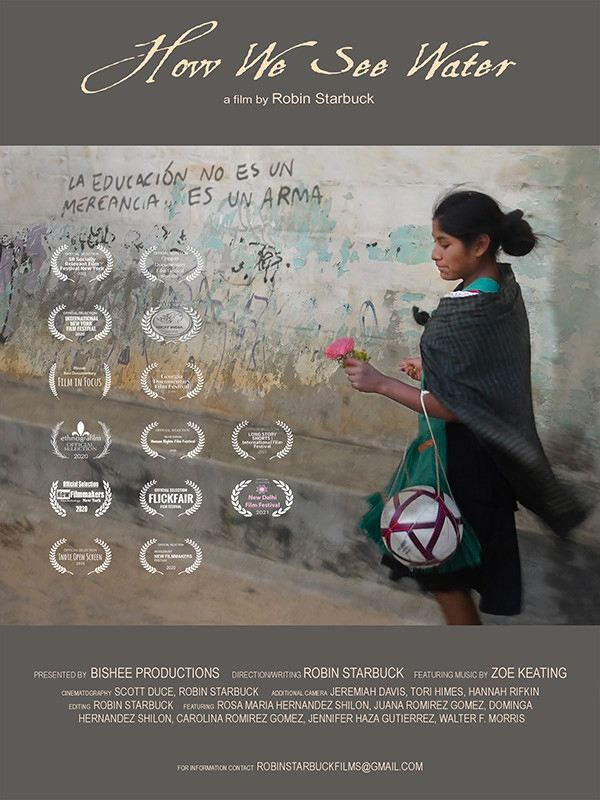