It’s 2050. Global temperatures are scorching the planet Earth.
While people go to the beach, Azzurra – Minister of Environmental Affairs – is about to have the meeting of her life with Livio, who is not only the Head of the Government but also her husband. She intends to propose to finance Sergio’s invention, capable of saving the planet.
However, the political situation together with global temperatures have been getting worse over the years, so much so that now, dictatorship rules. Though the population’s safety depends on this meeting, Livio is against Azzurra’s proposal, attacking her both verbally and physically, accusing her of having an affair with Sergio. The story then unfolds over different moments in time.
In fact, we see that a few days before the fateful meeting, a girl and a boy discuss the new invention and how it could save everyone’s life, including hers, as she is affected by a disease that causes hallucinations when temperatures rise. They must plot a strategy to propose the new invention to the Captain. But it doesn’t go as planned when the girl finds herself having to decide between her love and saving the World.
While pondering on this choice someone shouts “Stop!” It’s Azzurra! The boy, the girl, and the Captain seem to be actors reenacting a scene portraying how she and Sergio managed to save the world… but the Captain roars: that’s not what happened.
What actually happened is that after Livio hurt her, she was locked up in an incandescent cell, where her illness worsens by the minute, letting her hallucinations take over her mind.
When Livio goes to see her before she dies, he explains how he managed to save the world and got rid of her. But as she can’t stop repeating “Stop!”, her mind races and a smile lights her face up. The truth is not what Livio believes to be.

Salvatore Fazio was born in Messina in 1987. He graduated at the "E.Fermi" Scientific High School in Barcellona Pozzo di Gotto, then he studied "Political Science" at the University of Messina.
He has published three novels from 2010 to 2015: "A corner of life" (Kimerik), "Until the last heartbeat", "The island of memories" (Smasher editions). He has participated in two collections of short stories: "Figumaniac" and "Unforgettables" (Ultra sport). He attended a workshop for actors and directors, organized by Studio Cinema, held by Giancarlo Giannini, and another one organized by the Argot Theater, held by Massimiliano Bruno.
In 2017 he began to attend the "Scenic Arts Laboratory", directed by Massimiliano Bruno, where he studied direction and script writing.
In 2018 he directed his first theater play, "1943", together with Silvia Maria Vitale and Leila Rusciani, with Massimiliano Bruno as a supervisor.
He takes part to the theatrical review "Short Lab", with the theatrical short-play "Being Woody Nolden". He writes the theatrical adaptation of the text "Amaranth Revolution", directed by Antonio Gargiulo. In 2019 he directs the theatrical show "The public is always right" and he works as assistant director in "Zero", written by Massimiliano Bruno, with the direction of Furio Andreotti. An experience he has the chance to live again in 2020.
"Stop!" is his first short movie. 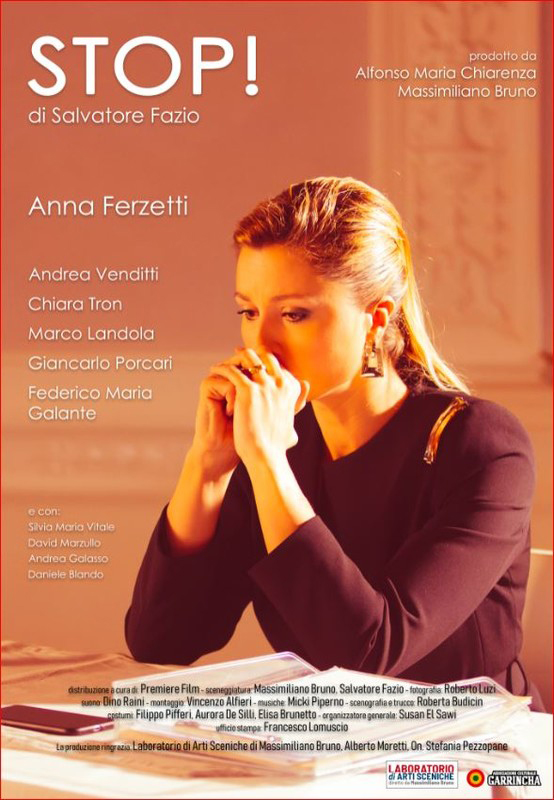