THE BUST - TAO OF BOBO


Until he met her, Bobo thought femme fatales were mythological creatures that only existed in the movies; Film Noir movies mostly.
He was, as it turned out, seriously naive in that respect. And of course education always has a price, but sharing his life with such an extraordinary human, even for the brief time they were together up until she had him arrested, was almost worth losing his freedom and all of his worldly possessions, almost.

First there was the Tao Te Ching written by Lao Tzu in 4th century China. Countless translations and interpretations followed, as did books that were inspired by the philosophy and wisdom contained within it.
Sixteen centuries later, The Tao of Pooh became one of those books. Written by Benjamin Hoff, The Tao of Pooh utilizes the fictional characters of A.A. Milne's Winnie-the Pooh to explain and simplify the principles of philosophical Taoism to Western readers.
The Tao of Bobo picks up where Pooh left off employing existentialism and doggerel in order to introduce Bobo's take on the Human/Animal condition via a series of digital shorts.(Daniel Appleby)

Daniel Appleby Is a writer/director/producer, who works in new media and old; creating content that ranges from feature films and documentaries, to beer commercials and webisodes.
His films have screened in film festivals throughout the no longer civilized world including...
Roma, São Paulo, Cannes, London, Seattle, Wexford, and Lagos. He is a published author and long time member of the Writers Guild of America West.
Appleby has work in the permanent collection of MOMA, the Museum of Modern Art in New York City. He has written and rewritten screenplays for some of the biggest names in Hollywood including Warren, Mimi, Bruce and Harvey, among others.
Appleby's work has entertained dozens of viewers throughout the no longer civilized world, on movie screens, television, and on mobile devices. 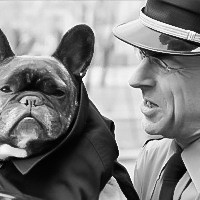