On a perfect Santa Barbara day the illustrious Amanda Cara sets her trophy husband about the task of getting her an "indoor tree" but he gets bombarded by his friend shaming him, her hot brother bullying him, a romantic threat to his marriage, his bank account drawing empty, and worst of all burnt cookies.
He's gotta suck it up and accomplish his trendy task despite his entire lifestyle being thrown into jeopardy.

"As one of the few Mexican-American female creative executives in the Entertainment Industry, I strive to create content and opportunities that elevate women and people of color in front of the camera and behind the scenes. Years of experience in leadership and talent management provided a strong foundation to segue to Directing, where I am able to empower and support actors and crew to deliver their best work.
I make my Directorial debut with the comedy short film Trophies. I knew this was the right project for me to helm because of the nuanced approach to gender, how it plays on our view of powerful females, takes us on the ride of men being compared as objects, and does it all with the playfulness of a comedy.
We tend to think of progress coming through in really "important" content, but when we are at our most frivolous, our guard is down and we can be exposed to the humanity in all the change we hope for
. Of course, to tell this story it was essential to represent new voices and faces in the industry. I’m proud we achieved gender parity with a staff, cast and crew that was more than half female and consisted of nearly 70% diverse voices." (Angelica Rosas McDaniel)

Angelica Rosas McDaniel is an award-winning, Latinx TV exec who launched CBS’ talk show, The Talk, and became head of the network’s top-rated daytime lineup.
A recipient of the Imagen Award honoring creative excellence of Latinos in the industry and founder of Chingona Entertainment, a production company that elevates and empowers women and diversity.
She makes her Directorial debut with the film Trophies. 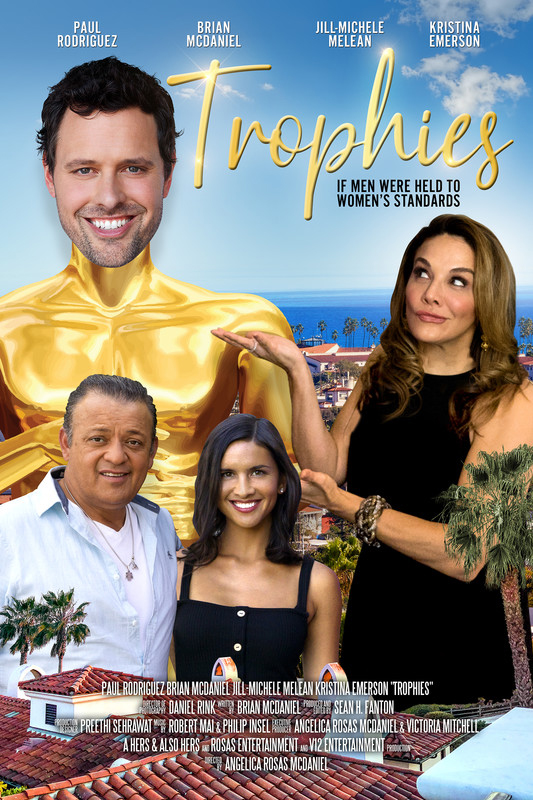