Gege, a sixth-grade girl, is moving away from the old neighborhood because her parents have decided to send her to one of the best middle schools of the city.
She, with her best friend Wanli – a boy, in order to ‘be together forever’, comes up with many tricks to prevent her parents from moving, but finally realizes that nothing could be changed, they have to say goodbye.
At last, however, Wanli comes up with an idea…

Sixth Grade is a story about love. (It's never too young to love!) It is about how children's love ignores unpredictable future and class differences.

I always have a deep affection with those old neighborhoods because I was brought up in one. I used to have many friends to play with. Only when I knew my parents were planning to move away for a better school in another district while my friends were still going to the ordinary one in the neighborhood, I started to feel that our families were different. We wouldn’t play together forever. The feeling of saying goodbye to them was awful, but I understood it was something I had to do, for a better life.

With this memory, I decided to write a story. I believed the affection between children was powerful enough to transcend the class differences of the adult world, and that was why the character relationship of Gege and Wanli jumped into my mind. Two children don’t want to be separated but finally agree to say goodbye, both because of love. Telling a love story of children might touch the taboos, but I was excited about it, and I believed many audiences would feel the same way. Since my starting point of the story might be heavy, I tried to tell it in a relaxing and hilarious way to make my audience laugh. Laugh is hope.

This was my first time to direct. I’d thank the cast and the crew and every friend that offered help. The two producers, Siyue Wu and Ruitong Wu, did a marvelous job organizing the whole crew. Our cinematographer, Binkai Xiang and production designer, Xuecheng Tian were so patient that we worked well on visual design. The shooting location of Gege’s home was originally an empty apartment without any furniture and we did decorate it to a “home”! And it was actually the actress of Gege – Xinyi Shan’s first time to act. We were so surprised by her flawless performance.

“Love isn't something that weak people do.” I learned the quote from the TV Show Fleabag, by which I was inspired a lot. I'm so happy to have my characters braver than me in childhood. Sixth Grade is what I dedicate to brave people and people who want to be brave, and I hope you’ll enjoy watching it." Yuzhuo Wang

Yuzhuo Wang is a Chinese screenwriter and filmmaker, majoring in Playwriting and Screenwriting (BFA, Class of 2021) at Communication University of China.
Her first feature film script "The Folded Museum"(2018) was selected into the 9th Youth Outstanding Screenwriting Project (Chinese: 第九届扶持青年优秀电影剧作计划), and the second one "Monica"(2019) was selected into the Venus Project of the 14th Chinese Young Generation Film Week (Chinese: 第十四届华语青年电影周“启明星计划”).
She also received the China National Scholarship for the 2018-2019 academic year. 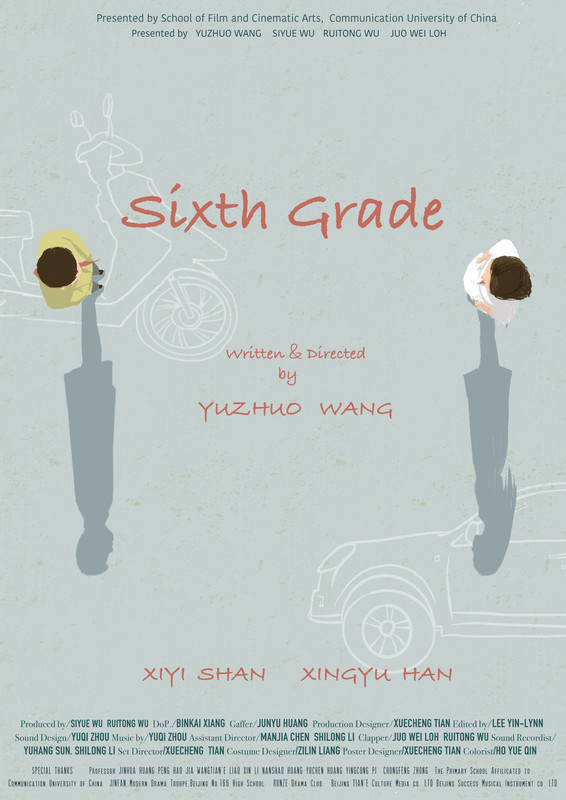